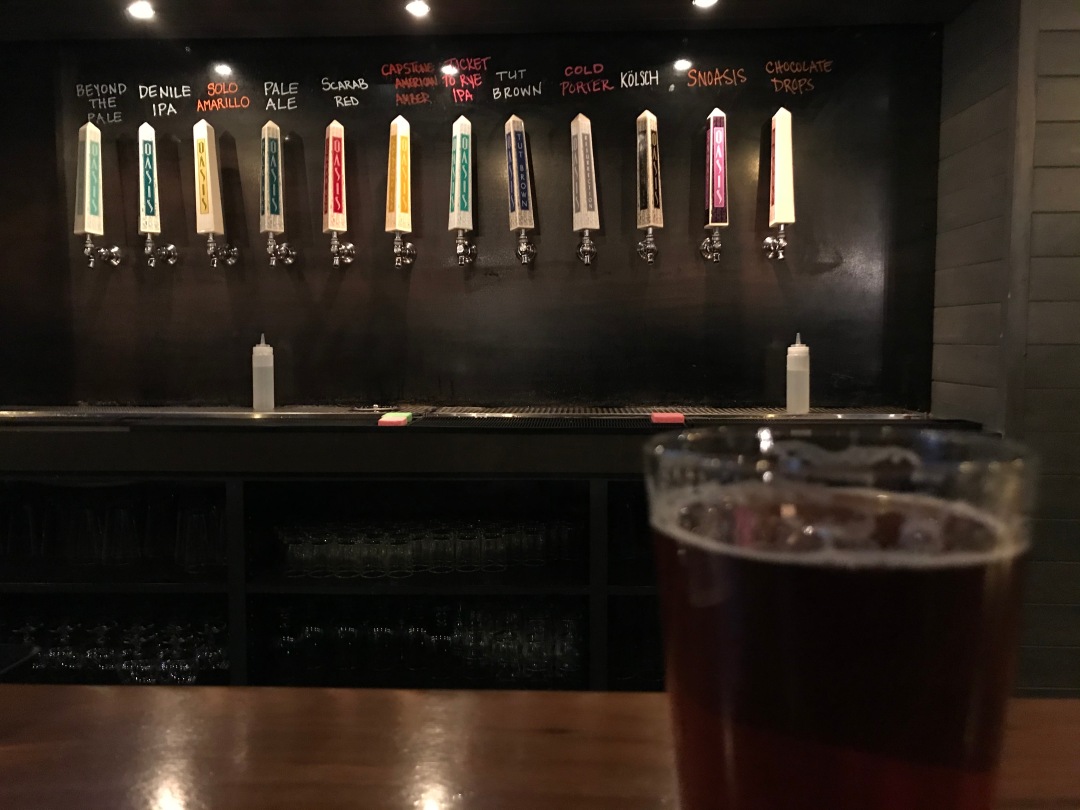 “Lunchtime at the Oasis”—An Excerpt

It can sometimes be foolish to simplify the entire ups and downs of a large movement by looking at one individual business. It can also illustrate broad stokes succinctly. With that in mind, I give you Boulder’s third brewpub: Oasis Brewer Pub.

Located on Walnut St., the brewpub kicked the door in for Boulder drinkers. In a post-Prohibition America, the concept of beer brewed on-site and consumed with lunch or dinner was only a few years old but made up for lost time quickly. Hanna observed at the Walnut how readily Boulderites took to good beer and decided he would try his hand at his own place, the Oasis:

“Early folks in the business really had to fight that stigma,” Hanna said. “Full-bodied, full-flavor, big beers, more alcohol.…It’s really what was going on in England.”

English-influenced and inspired ales were commonplace in the burgeoning craft beer market for a variety of reasons. Ales ferment at a higher temperature than lagers and for considerably less time—a few days as opposed to a few weeks—which makes them cheaper to produce. The ability to turn tank space is crucial for those starting out. If you’re going to serve beer, you better have a lot on hand. Additionally, ales are easier to brew—or, more accurately, easier to conceal off flavors or inconsistencies.

And probably most important, ales are wildly different in color, aroma and flavor than the German-influenced macro lagers on the market. If you were going to persuade a drinker in the early 1990s to try something new, something different and, more often than not, something more expensive, you’d have better luck with a beer significantly different rather than a beer slightly similar.

Boulder County Beer: A Refreshing History, “Lunchtime at the Oasis”

So much so Hanna expanded the Oasis concept to packaging and distribution. He acquired a second brewery, the Oasis Brewery Annex, incorporated Dec. 15, 1994, and started pushing out beer by the barrel. Seven years later, Hanna was done—you’ll have to pick up the book to read the rest of that story.

But there’s a postscript: In Spring 2018, Hanna rejuvenated the Oasis concept with a new seven-barrel brewery, this one located in north Denver’s Highland Square neighborhood, in a former Baptist Church with exposed brick and high ceilings.

No longer a brewpub, Denver’s Oasis Brewing fits in nicely with other contemporary taprooms. The décor is sparse, the design is modern, the space echoes. It doesn’t take many voices to make the room feel full. And unless you took notice of the sign over the bar—it’s the original Oasis sign saved from the Boulder brewpub—or the core line-up of ESB, brown and red ale, you wouldn’t suspect anything here stretched back to the ’90s.

When I interviewed Hanna for Boulder County Beer in early-2020, we talked over pints of Capstone ESB (dark mahogany color with a reddish-amber hue in the light; the head clings to the glass; the nose has a subtle roast; the mouth is the same: Roasty, caramel with bitter notes) inside Oasis’ taproom on a Friday afternoon. There were only a few people in the place when we started talking. Seventy minutes later, the room was filled with families and couples starting their weekend. Hanna loved it. When he started in the business, drinking in breweries and brewpubs was a raucous and rowdy affair. Today, it’s a little calmer.

Hanna no longer lives in Colorado; Morianne Smith owns and operates the Oasis Brewery. My wife and I stopped in for a pint of Scarab Red the other day, and the beer still sings with sweet malt. And even with tables spaced six feet apart and a moratorium on mingling, couples and families were drinking good beer and enjoying good conversation. Boulder’s Oasis is long gone, but Hanna’s Oasis in the city lives on.